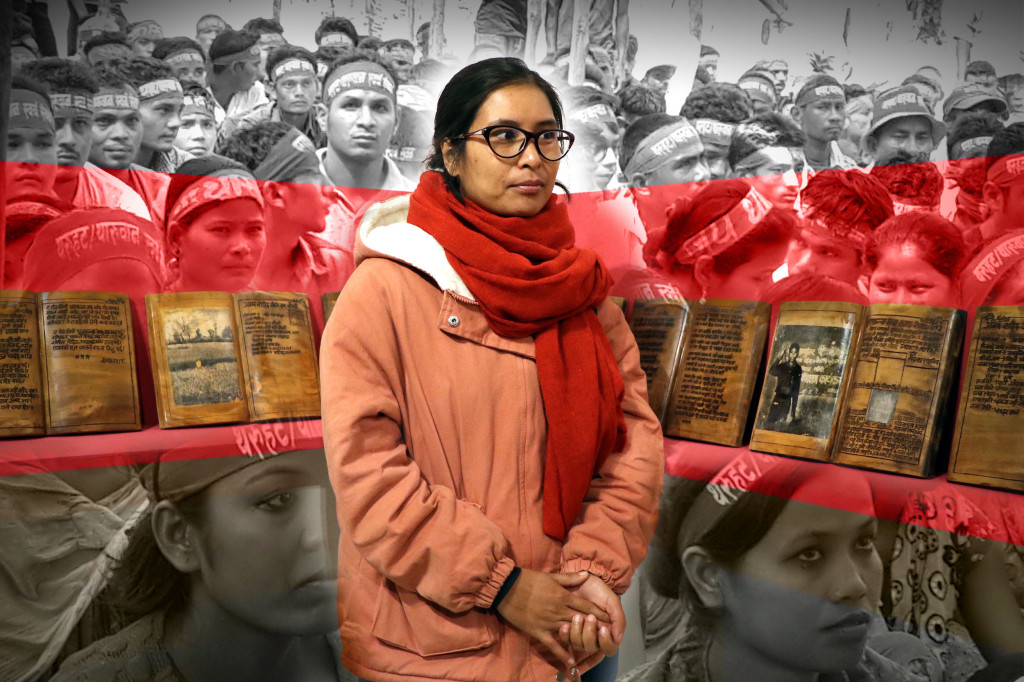 I was born in Hasuliya village of Kailali district in Far Western Nepal. I am a Tharu – indigenous to the land where I was born. I grew up with my mother, grandmother and two younger brothers. My father was one of the founding member of then Nepal Communist Party (Maoist) in Kailali district. I have a vague memory of him. I remember him staying far from our home and would visit us at times. The army and police would often come to our house looking for my father. Not been able to find him, the authorities would give us all a very hard time. He stopped coming home that often. After a while he went underground. 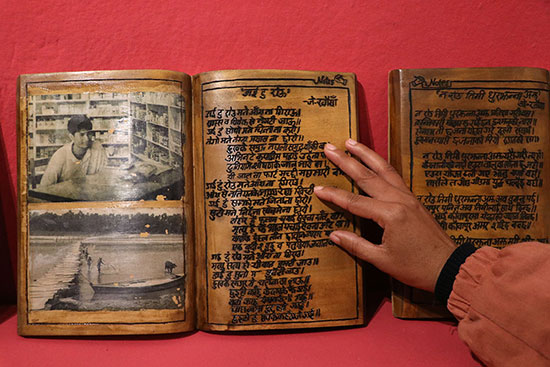 My father had a pharmacy. We don’t know when and how he got involved in the communist party, the then banned outfit. After both my father and uncle joined the party and left home, my grandfather took over the responsibilities of our home. My grandfather was a peasant. He had to struggle a lot to make sure I got educated.

The Nepal army would come and torture us all quite frequently. One day, the police took my grandfather and beat him inhumanely. He died with his severely wounded body as he wasn’t taken to the hospital on time. After his death, my family went through major financial crisis. My mother and grandmother did not know how to read or write. They only spoke our native Tharu language and did not speak Nepali. Due to the immense stress they couldn’t work much. But somehow, they managed to continue sending me to school.

On June 11th, 2001 we got informed by the party that my father died in an incident. We never saw his dead body. The Maoist party completed his funeral and lots of people told me that they saw my father’s dead body but I still don’t believe it. I feel that one day he will return home. I keep seeing him in my dreams too. 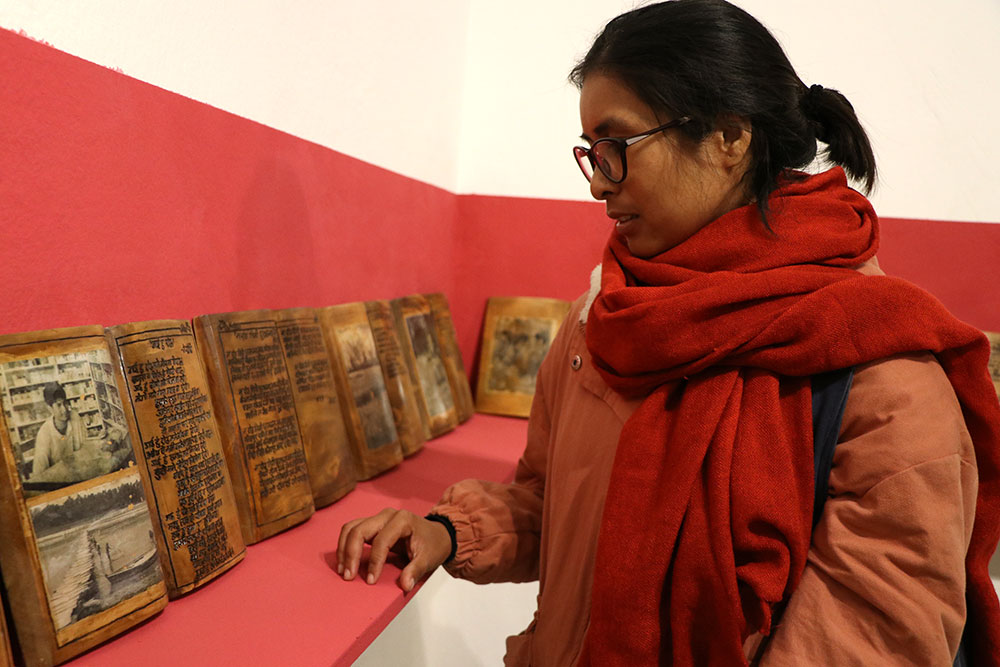 After a few months, my uncle was also brutally killed by the police force in one of the raids. He had also joined the underground party. Basically he had no choice than to join the party because of all the torture he would get from the authorities for being a brother of a Maoist. We did not see his dead body either. His wife was pregnant at the time.

Life became very difficult for us. The ten years long People’s War engulfed all the breadwinners of my family; my grandfather, my father and my uncle.

I used to be a very good student as a child but after losing my family members I stopped focusing on my studies. My entire family went through severe depression. Three women in my family lost their husbands in a short span of time, one after another. My friends stopped playing with me because my father was labelled a terrorist. Our society literally stopped interacting with our family. We were socially outlawed. All the remaining members of our family went through mental and physical trauma. 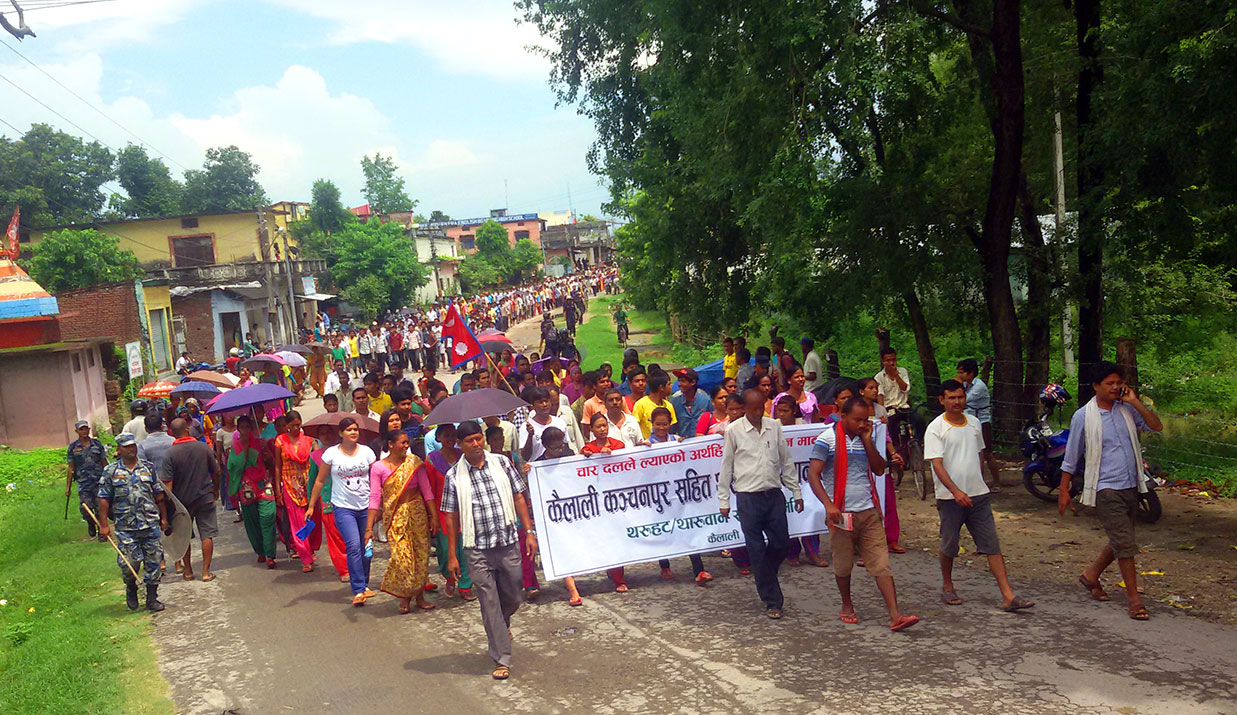 When my father was still alive he told me a few things. His dream was to change the system. He would tell me how the Tharu people have been historically oppressed in Nepal. He made me understand the concept of Kamaiya and Kamlari practices. He showed me how we were discriminated against through the food we eat. In my childhood, it was humiliating when someone called us rat-eaters.

My father and uncle dreamt of federalism, of creating a Tharuwaan state for the Tharu people. Now, after all those years, the same Maoists are part of the government but still the Tharu people are oppressed every single day.

My father published a monthly magazine “Muktik Dagar” (means: a freedom path) with revolutionary songs, poems, and articles in Tharu language. During the war times, people would get arrested for just having that magazine in their house. People would immediately dump or burn it in fear of police raids. After my father’s death it stopped being published. I still remember many soulful revolutionary poems and articles published on that magazine. 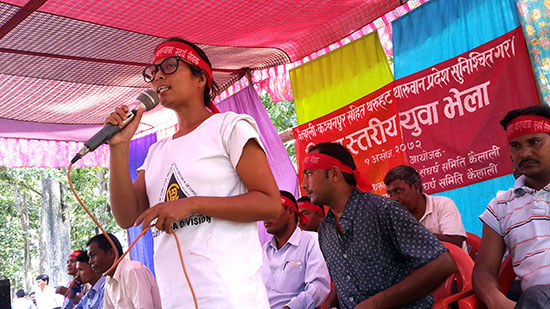 After years of struggle, I also started becoming very politically active in 2005. I was actively involved in the movement to get rid of the king in 2006 and then in the Tharuhat movement since 2007. I was the treasurer of the Tharuhat Tharuwaan Committee. Back then, the Tharus were put in the same category as Madhesi. We began our movement for our own identity. We demanded proportional representation and a Tharuhat autonomous state but none of our demands were addressed. I was young back then, just out of school.

In 2015 we started another Tharuhat movement. It was heavily repressed by the state. The police went around arresting every male who was involved in the movement and attacking every Tharu house. So, we made a strategy to protect our movement and women took over and led the movement. We wore our traditional clothes and protested in the streets of Dhangadi for weeks. We started celebrating our traditional festivals. In retrospect, by these actions at least we managed to save our clothes and culture. We also started lobbying for our native language to be taught in schools and to make it an official language in the government office procedures. 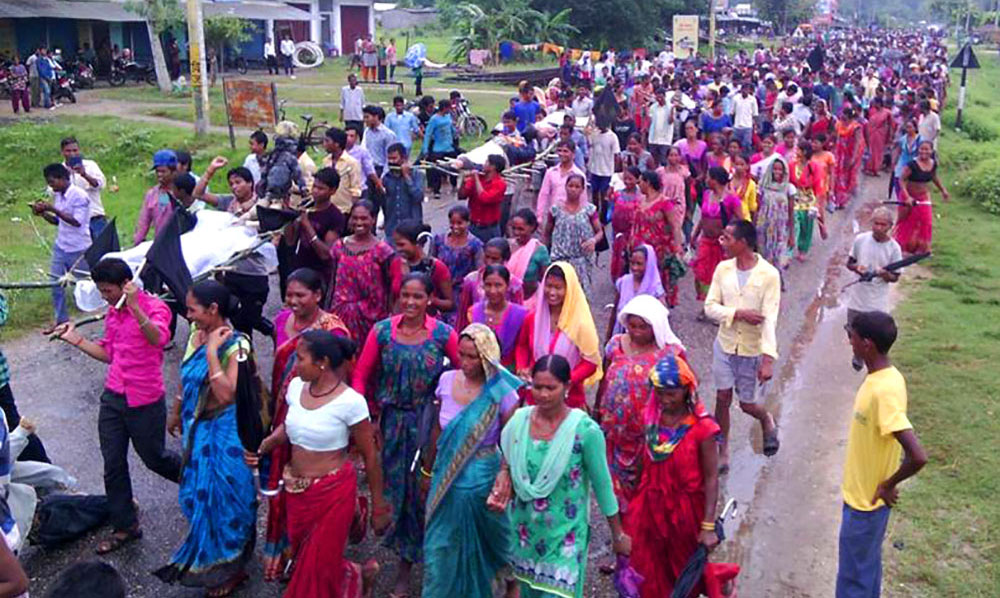 We were organizing a mass conference where many activists from around the country was supposed to participate. The supporters of Akhanda Sudur Paschim – people who were opposed to our idea of autonomous Tharuwan – stopped villagers and participants to reach our venue in Dhangadi. They started pelting stones and blocking roads. Many participants from Tikapur who were coming to our conference also got stopped on the way by this group who started voicing against our movement. Many people were injured. After our mass conference, they then organized a motorcycle rally but the people of Tikapur didn’t let them pass. With the help of the police and local authorities, they started attacking us. They beat, torture and gave Tharu people a very hard time. They burnt our homes and offices, vandalized properties owned by Tharus. It was a one big systematic attack targeted against our community to silence our movement. 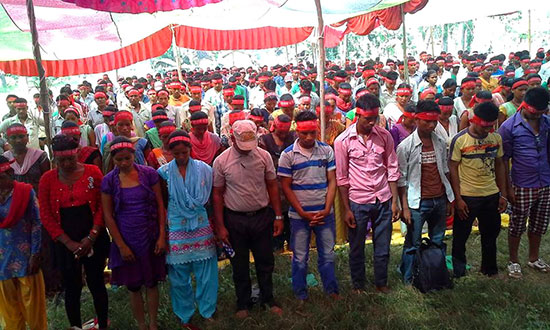 On 24 August, 2015, we had a program demanding an autonomous Tharuhat State in Dhangadi. Me along with other Tharu activists went to put a banner in front of the Chief District Office. Meanwhile the Tikapur massacre happened. We were protesting and heading our rally towards the CDO. After a moment we got a call from Tikapur that many people were killed while demonstrating. Then, we decided to turn back.

There are many reports of Tikapur massacre, including report by Amnesty International, but the government didn’t publish any reports. They refuse to acknowledge the loss of Tharu lives caused in the massacre. Tharu people also started getting severely oppressed by the state repeatedly. Police would go around arresting people again. People fled their homes and started hiding in the fields. We were not even allowed to go catch fish. Our daily lives are linked with fish, it being a basic diet in our culture. Not allowing us to do our daily chores was definitely a major human rights abuse.

For me, that was a realizing moment, that I could not go much further politically without being totally destroyed by the repression. So, like my father, I picked up my pen and started to write.

I started writing articles on Tharu identity, women’s rights and other socio-political issues. I then joined Democracy Research Center as a researcher. With some of the money that I got from my job, I did something which I’ve been always meaning to do it since I was young.

After twelve years, I re-published “Muktik Dagar” in my own editorial, in memory of my father. For me, despite of all the state repressions and all those failed attempts at independence, Tharus will continue walking the road to freedom. 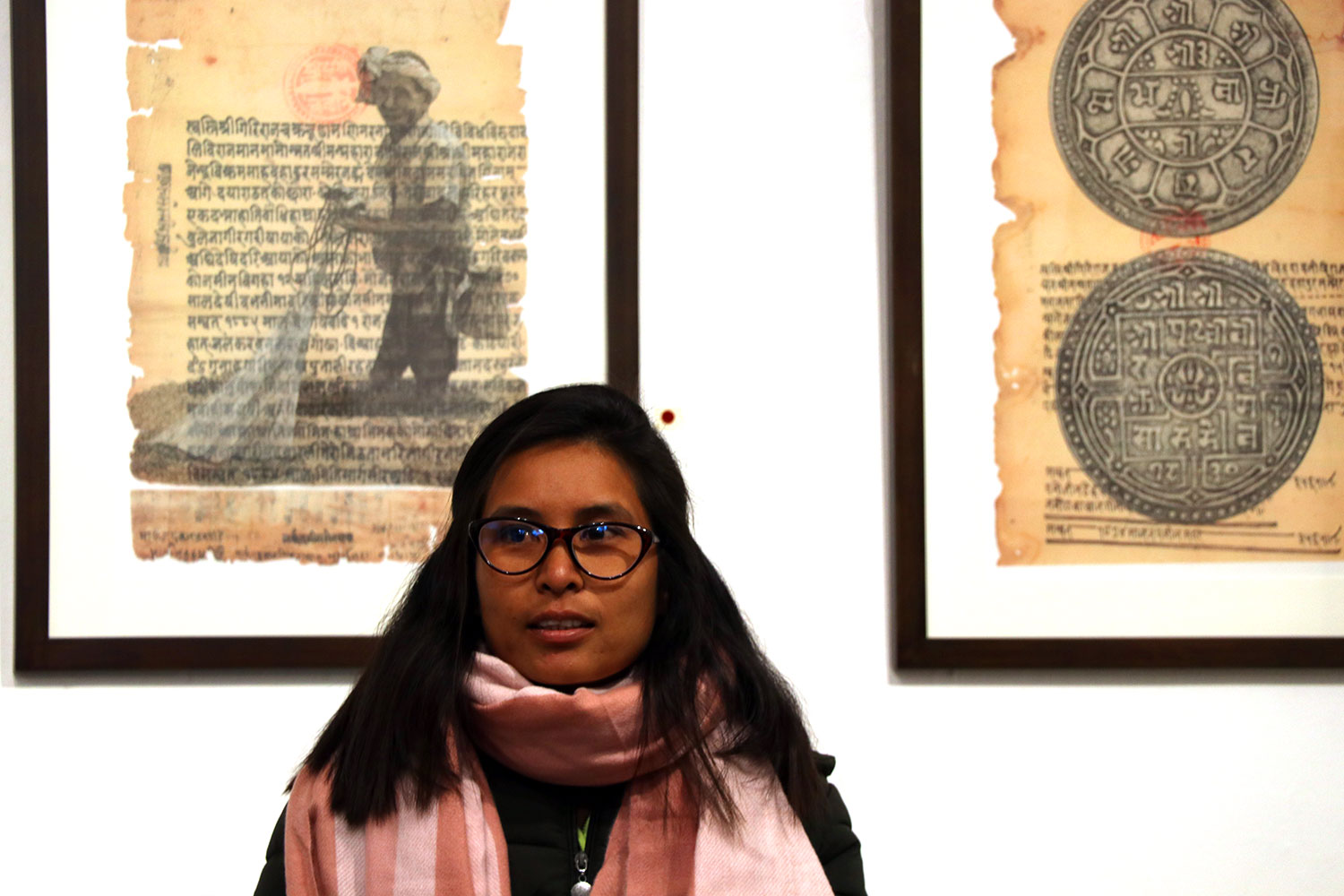