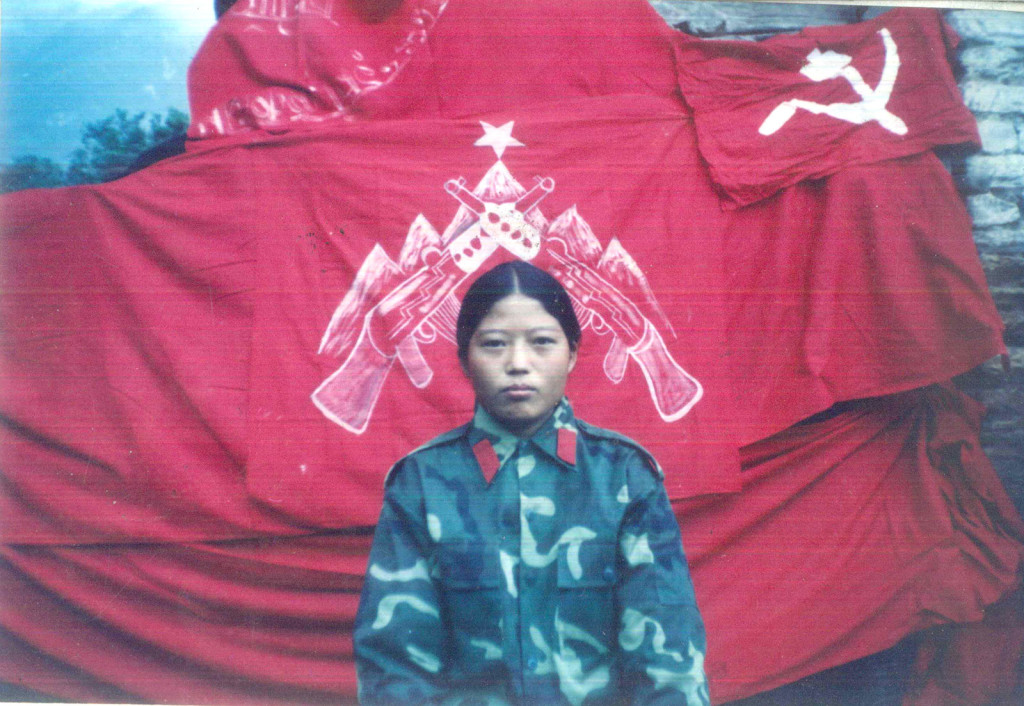 I was young. I was at home. I had an uncle. He was involved in the Maoist movement. He got disappeared during the people’s war.

Our culture and society discriminates between women and men. Whenever a girl and a boy talk or walk together, people talked like it was a terrible thing. I was a mischievous child when I joined the Maoist rebellion.

My objective was to eliminate the gender discrimination that continues to exist in our society.

When the Maoists held cultural programs I used to attend as an audience. One day I watched their performance and left home to join them. Since then I became a member of the People’s Liberation Army. I fought in all wars since that day because for me, it was a fight against gender discrimination. As soon as women leave the four walls of their homes, everything they do is seen from a negative point of view. Women are seen as a weak gender. I fought for gender equality. Because of sacrifices of women like us today there are women who are in powerful positions like the President and House Speaker of our country but what do they do for poor women like us?

Since puberty I have fought wars. Sometimes for 8 hours.

I was shot and almost starved to death but I never thought of becoming a coward and giving up.

At one period I was a commander and trained 30-35 people in the camp. I felt like I had to fight this war to end this discrimination once and for all. I am proud of what I did and even now, I have only one weakness and it’s the bullets that have wounded my body. As far as my brain goes however there is nothing I cannot achieve. In the course of fighting the war I was shot twice. One of the bullets is still in my body.I was in a coma for 16 months. I remember waking up from it and seeing my wounded comrades around me on the floor.

After the war was over and we were in the camps of UNMIN, they decided that I was not deemed fit to join Nepal Army. We had to pass a test and if we did then we were given a choice of either joining Nepal Army or take some money and leave. I was unaware of the date of the test since I was busy with medical check ups and had gone to Dolkha during that time. So I never got anything for fighting. I still don’t have enough money for medical check ups. I was a warrior who fought a war at Krishnavir for 8 hours with no food. This is the same body that fought a war in Siraha for 8 hours. There are so many battles I was part of, its almost uncountable and yet here I am; poverty stricken, wounded and alone.

I didn’t receive a penny from the budget allocated for the people who were affected by the war.

The Nepali State gave a small amount as relief to those injured in the war. I have not received anything from the state because I wasn’t sent a notice about it. Later when I found out and went to the ministry they told me that the time to get relief was already over. I pleaded with the leaders of our district committee to try and arrange a small medical relief fund for me but nothing happened. If I didn’t have my husband, I probably wouldn’t be alive today.

I met my husband while we were both in the UNMIN camp. He proposed marriage to me via his commanders and at first I rejected it since I’m so injured and my health is terrible. But later I gave in and we have a son now. Right now my husband is in Malaysia, working as a painter to support our family. I have to take medicine daily otherwise I get unconscious. Most of my husband’s income goes for my medicine.

While we were part of the people’s army there was no discrimination between a man and a woman. We were treated as equals.

When we had our period we could take leave for a few days. Married people could live together. If two people liked each other, we could notify our commander and ask for permission to see each other. We were given equal amounts of work and truly treated as equals.

We were all very disciplined. The hardest part about adjusting to life outside the people’s army has been readjusting to living in this discriminating society again.

My family thought I was dead in the war. When I returned they were very happy and treated me well. But once the Maoists came to power and my family saw how they betrayed us they started giving me a hard time. They would often tell me, “What did you achieve? Is this what you fought for?”

I feel like after all our sacrifices we have been forgotten. No one has tried to understand the kinds of problems we are facing. The leader under whose command we fought has forgotten about us. Inside the current Maoist party there are women in positions like minister, house speaker, members of parliament, politicians but even they don’t care enough to understand the problems of the ex-women fighters.

Today I am isolated by both my family members and my party members. I have health problems due to the effects of the war. I have to take care of myself and take medicine twice a day. But through it all I continue another war of my own; I learn to be self- sustaining and strong in order to survive and live a happy life.