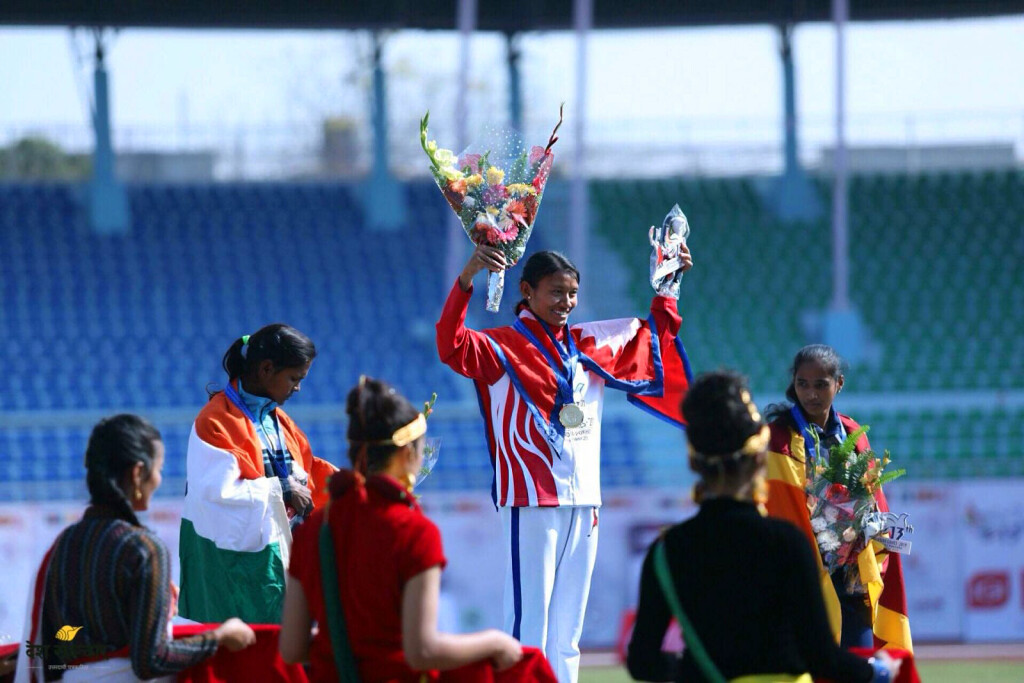 Whenever I remember my childhood some memories come to my mind which makes me very happy. And those memories make complete sense of who I am today. I don’t remember playing with toy dolls like other girl child, may be because I had more male friends than females. I used to play football and dandibiyo, a complete male dominated game back in the days. That may be the reason why I walk faster than others. But my mother and grandfather and most of all, my neighbors, hated it. They’d always try to slow me down whenever they saw me walking fast. They believed that a girl shouldn’t walk so fast. It was one of those proverbs that were implied solely on women for stupidest reasons one could find in the planet. But my grandmother, contrary to those existing conservative ideas, always told me to walk how I wanted to. She inspired me and motivated me to walk ahead and run faster.

They’d always try to slow me down whenever they see me walking fast. They believed that a girl shouldn’t walk so fast.

I was 8 years when I moved to Kathmandu with my brothers in pursuit of better education. Kathmandu was completely new to us. Even though my elder brother was young, he was responsible for us. After him, it was me who had to take all household responsibilities including taking care of my younger brother. I was shy in nature and a pretty quiet girl. I was scared to talk to people so I chose to remain quiet than speak. Life in Kathmandu was way too hard, more than we expected, in the village.

I studied at Gitamata School in Kathmandu. Our school organized a program ‘Gitamata Star’ which had various other competitions including Athletics. I participated in all competitions except dance. As I naturally walked fast and ran even faster, I decided to take part in the running competition. I registered my name for it. Later I realized I needed proper shoes to run and most importantly formal techniques and skill. I became hesitant to compete and thought of excluding my name as all my other friends were retreating from it. Meanwhile, our teacher announced a monetary penalty for those students who wanted to remove their names from the competition. Even though I wanted to remove my name, I wouldn’t dare to ask my brother for money. So I was forced to run.  I became first in that running competition. 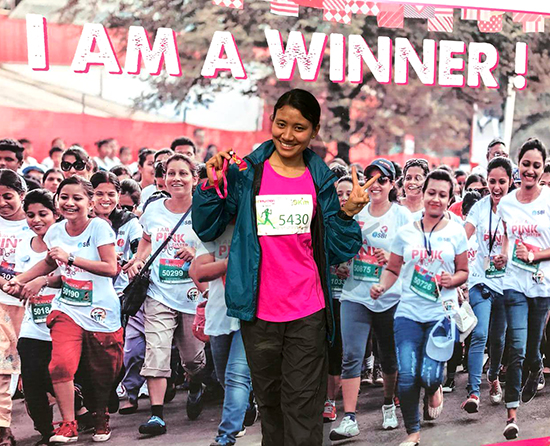 After a year, Red Cross Society sent an invitation to my school for another competition. Six students had to partake and I became fifth during the selection round. Everyone appreciated it as I competed and secured winning positions without any formal training. Many competitions kept coming. I also became second in the valley level championship. After that, my teachers would nominate me for any other competitions without even thinking.

In the school running club a senior student, who was also passionate and wanted to be a professional runner, guided me. I became more interested in running but I never thought to be an athlete. During school days, I had far too many responsibilities. Managing time for my studies, training and household chores was pretty tough. As soon as the bell rang at 10 o’ clock, I had to rush for school. I used to come back home during lunch break to wash dishes because I had to queue to get some water after my school. As night fell, I would run on the roads of Kathmandu to train myself, without fear or embarrassment.

I was a bit confused. It was more like a fear of obstructing my education while focusing on the game.

During high school, I couldn’t give much time to athletics due to my studies and responsibilities. I participated in junior and school level competitions only. After a year gap, I took part in an open competition with the support of my seniors and my brother. I secured third position without training. Then, everyone suggested me to continue but I was worried about my studies. I was a bit confused. It was more like a fear of obstructing my education while focusing on the game. In the midst of these confusions and uncertainty, I kept participating in the competitions. I’d run whenever and wherever I could. I couldn’t give my full time to running until I finished my bachelor’s degree. I was also offered a contract by a sports club but I had to refuse it because I couldn’t manage my time.

I would constantly worry about my career. I would think about how to possibly balance my studies and my running but somehow I’d completely mismanage. There are instances when I couldn’t participate in district level games because of my exams. I cried, totally disheartened. And there were other times when I would fail to participate because of lack of money and connections. And then again, some other times, I couldn’t participate because I was a girl. A girl leaving her home to participate in games outside the district was problematic.

Time passed between these days of dilemma. 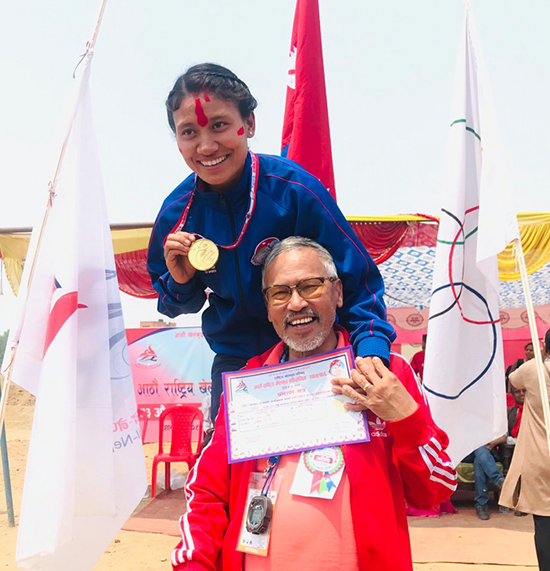 I would train myself. Although my brother was not from this field, he taught me whatever he knew. I wanted someone to coach me in the evenings but no one was ready for that. When I was in the final year of my Bachelor’s degree, a coach contacted me. But I ignored him because I wanted to focus on my studies. I thought I would not be punctual and would just be wasting his time. He seemed to be a very philosophical, positive and over all a good person. He convinced me well. He agreed to train me whenever I had free time. He trained me on the roads of Kathmandu in the evenings. He didn’t put a lot of pressure on me. Once I was done with my Bachelor’s degree, he finally started to train me on a regular basis.

My training and job would go hand-in-hand. I realized that working full time and running at the same time was more difficult than studying and running. Luckily, my workplace supported me a lot. After training, an athlete must rest for two hours. Instead of resting, I had to go work on an empty stomach.  Most of my competitors were from athletic clubs. I had a nagging fear about whether all that hard work would be worth it or  not.

I joined Tribhuvan University for my Master’s Degree. I had to go to college in the morning and office during the day. My coach would often ask me, ‘When will you do your training?’ So I started doing regular training at 4 in the morning and jogging at 7 in the evening. It was a hectic life for me and also for my coach. 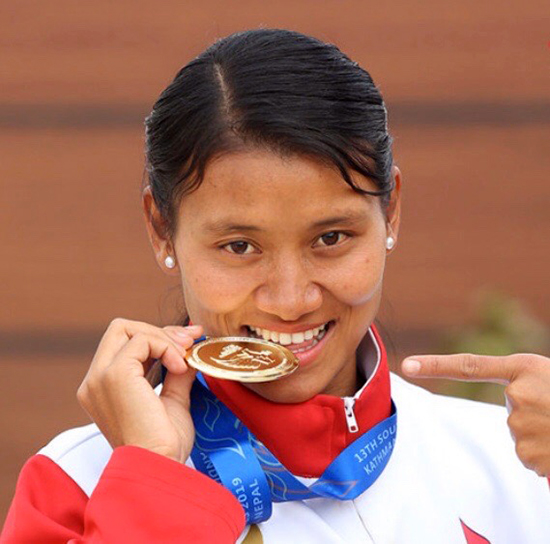 I talked with my family and coach and decided to stop studies. I felt unhappy for a while after but now I’m grateful for that decision. Slowly, I also quit my job to focus on national games. I had to prove myself better in the national game to take part in the South Asian level. I performed well in the national game and also grabbed a gold medal in 13th South Asian Game in the race of 10,000 meter. I cannot define how I felt to know that I became a first Nepali woman to win gold in athletics.

I want to set an example for upcoming generation that we can balance both study and sports together. And we must not bind ourselves in anything small. We should experience this world and life. From a young age I heard many people saying that one should not step in two boats. But now I realize if  I had stopped doing what I loved the most, I’d not reach the point where I am now.

I wouldn’t have reached here without a supportive coach, family members and my friends. 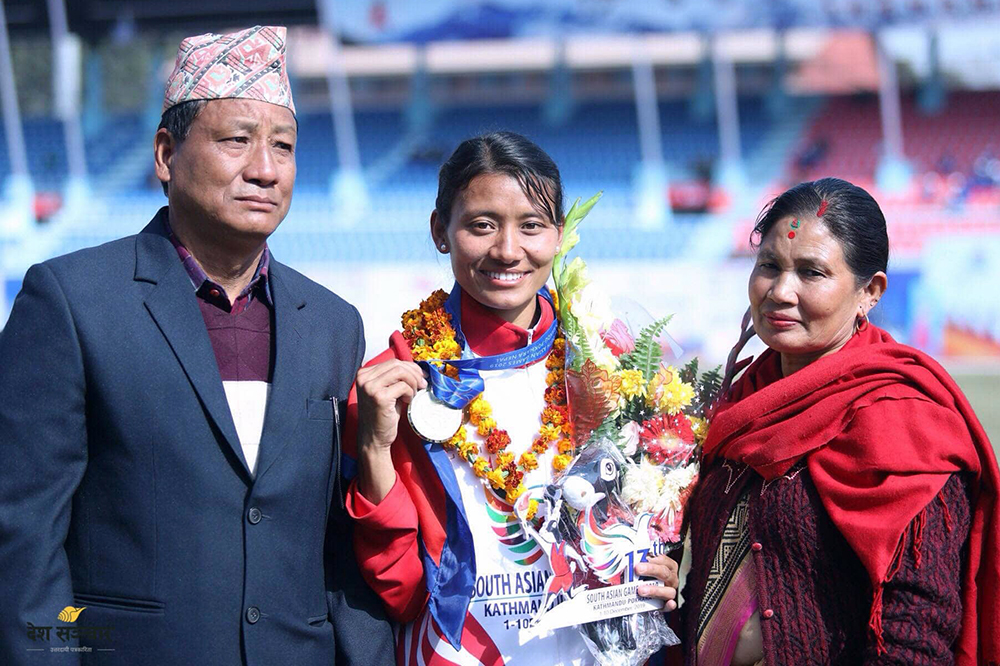 All photos received from Santoshi Shrestha.