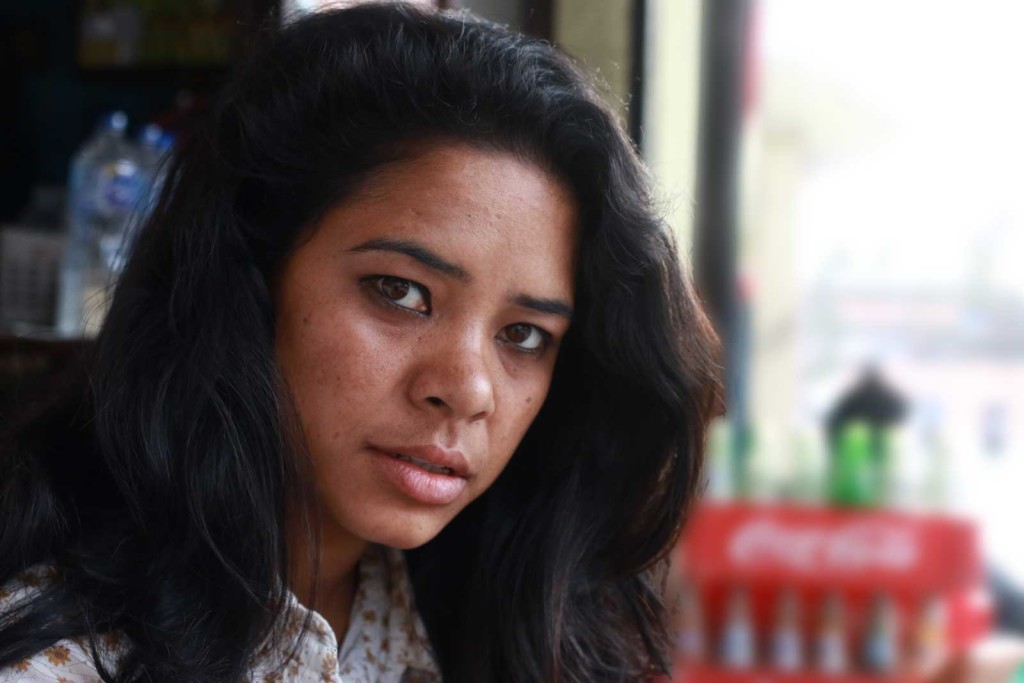 I was born in the house of a Dalit farmer in PokhariChaur, Kavre.  It is one of the most remote villages in Kavre. We have a huge family with eight siblings. I had three older brothers, two younger brothers and two older sisters. I am the youngest girl child.  Even though we had a very simple life, my parents never let us feel deprived of anything.

During my childhood I was very naughty. I always tried to skip my work. Whenever I had to collect fodder and do household chores I would try to escape it. Maybe because I was the youngest one so my elder brothers and sisters spoilt me and just did most of the work.  I remember always taking the smallest pot to fetch water and used to take the fodder that my friend collected instead of going to the forest myself. I was a playful kid and an average student.

I always dressed up like a boy and played like one. Whenever I went to collect fodder I used to climb trees, cut the branches and leaves. I felt like I could do everything my brothers could. 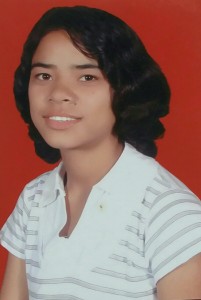 During those days’ people were unaware about education. There were only two people who finished high school in our community. Even though we were farmers and impoverished, my parents believed everyone had right to a bright future. My father was an active social worker. Whenever there were disputes in our village my father used to be the first one to settle it and I strongly believe that we may have inherited that same character of his.

The Maoist war had started in 1996 when I still a child. The In-charge for the eastern part of Nepal was from our village. One of my elder brother was actively involved in social clubs and community work when in high school,  later  we found out that he had joined the Maoists which my parents had totally not expected. That was around 2001.  Everyone knew that lives were not secure if they joined the Maoists. A lot of times families didn’t know whether their children were dead or alive. My parents went in desperate search of him and wept for more than seventeen days.

In 2002, we got news that said he was transferred and killed in a combat. That same year, after about six months, another one of my elder brothers joined the Maoists. 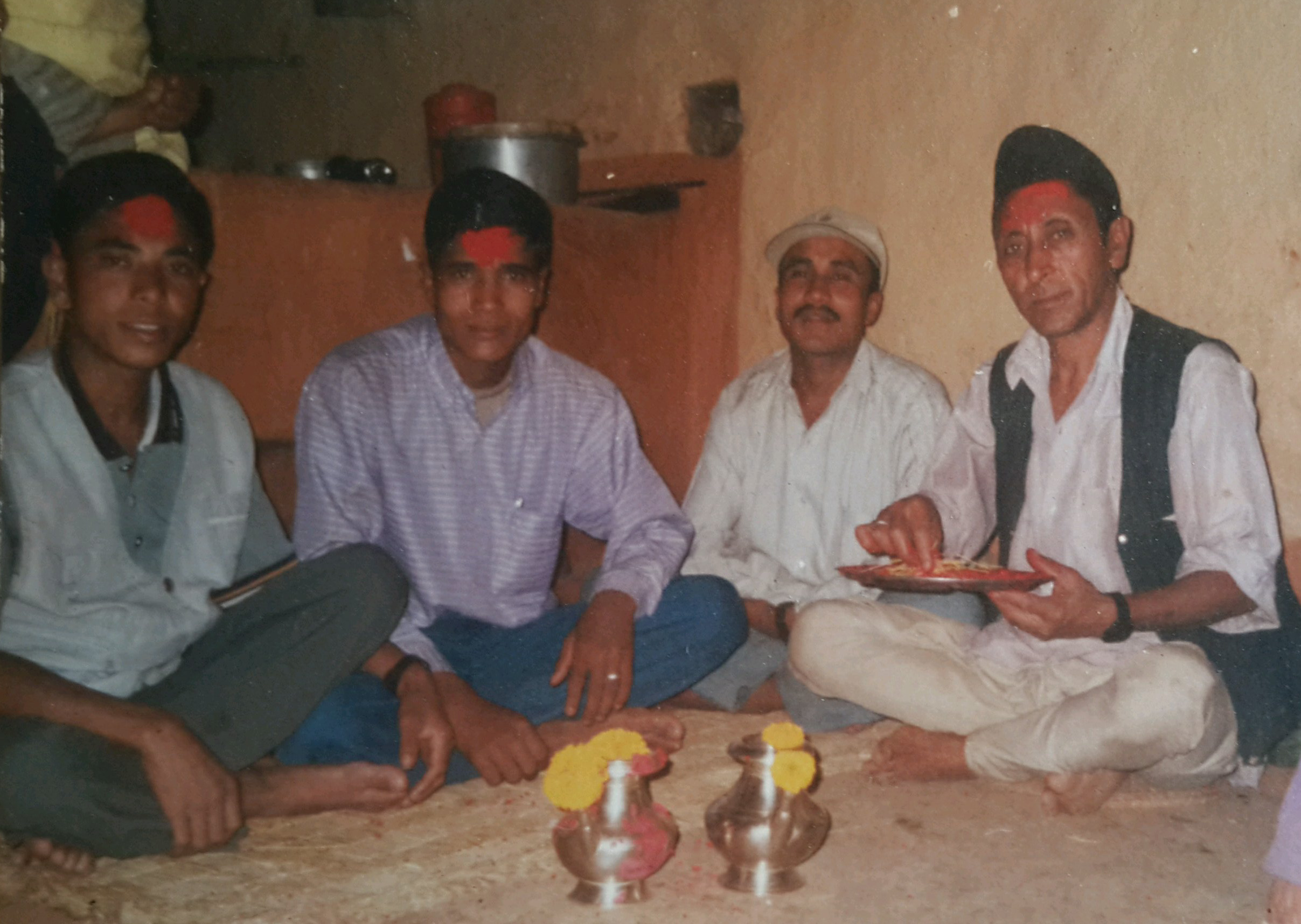 Eventually I too joined the Maoists when I was fourteen years old. I joined them because besides the fact that I was born in a Dalit family and wanted to end the brutal caste system, the Maoists were also looked upon as some superstars of  Bollywood in our village. Even the women wore men’s clothes and walked around with a gun in their hands. I felt they had a really good life and were badasses. I wanted to live like them.  Another reason I joined them was also because I had no friends left in school. They all had joined the Maoists.

The day when I ran away from my home was a school holiday. One of my friends who was a Maoist came to my house to have lunch. We planned my escape. According to the plan, I would ask my younger brother to take the animals grazing and escape when my mother was busy with her work. I didn’t carry anything with me except one pair of inner clothes. One of my friends saw me run away with the Maoists and told my mother. After an hour my mother came searching for me. We hid ourselves in one of the villager’s house.  During the first night I missed my family and cried. Now that I think of it, I don’t think I would have become a Maoist if they had returned me home.

I was fourteen and I had no idea what I was after. The moment of excitement to be renowned and make a change made me join the people’s war. Even though I have no regret in what I did, I would want other teenagers to study at that age if someone asked me today .

Time passed as we moved from one village to another. I gained experience and learned about life after I joined the party. 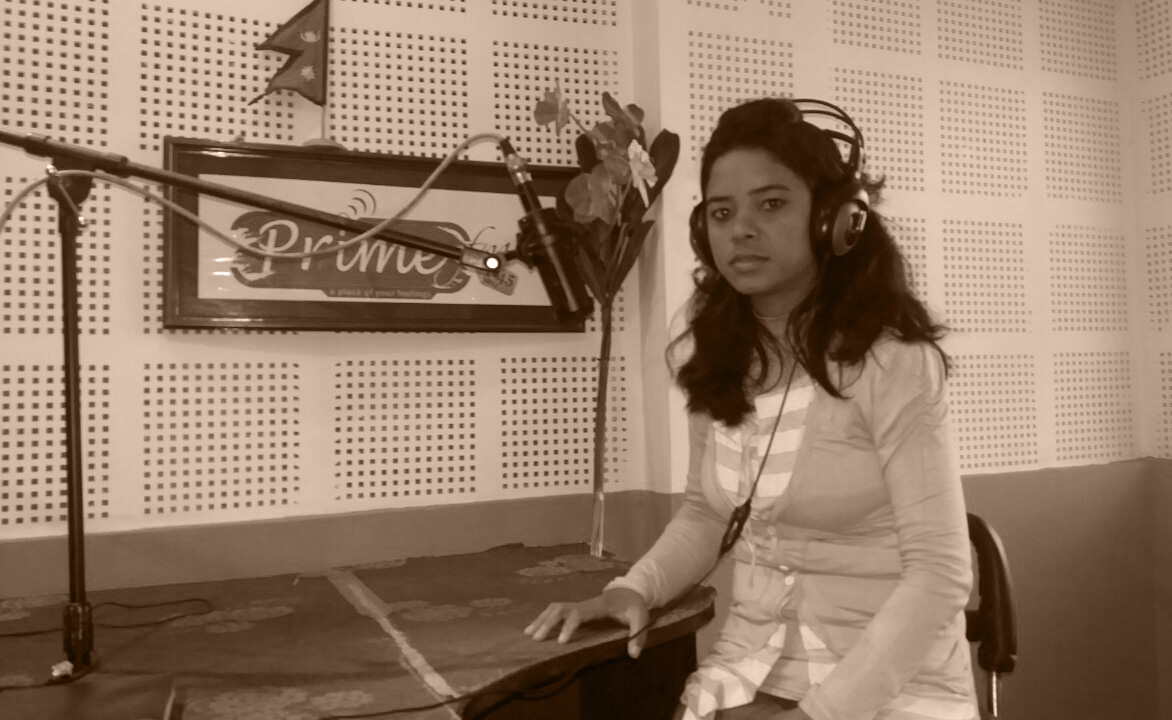 February 13th is celebrated as People’s War Day.  One of those days, I was placed in my home village and in the morning had gone for celebrations.  At around midnight one of our friends came running towards us yelling ‘army’ ‘army’, so we ran away and hid somewhere across the river from my village.  Finally, at 4 am we saw her again and she told us that Nepal Army had been after them, she managed to escape somehow and came to warn us.

The next day, I was listening to the afternoon news when I heard that 2 Maoist women were killed during a fire exchange. Their names were Reena Rasaili and Shubhadra Chaulagain. When I heard my sister’s name I was horrified.
The army was making up lies about her and misrepresenting her as a Maoist which I just couldn’t bear. My sister was not at all into politics. She would rather study. She had even tried to stop me from joining the Maoists and had encouraged me to study. This news left me paralyzed and numb. I didn’t know what to feel. I was completely out of control for the next few days.

My mother was in a critical condition. Whenever she saw a young teenage girl she fainted. I couldn’t go home. My friends told me to stay away because my mother would surely faint if she saw me. In a few days I met my father. I cried when I saw him and he tried to calm me down. He assured me if I came back home he would find a way to protect me

I asked him what happened that night. He told me that at midnight there were some people knocking at the front door. By the time my father went to open the door they had already broken down the door and went straight to the room where my sister slept. They dragged my sister down outside the house, locked the doors and tortured her. They could hear her crying, pleading, them asking her questions about the Maoists, and her answer to them saying she is studying and teaching and she doesn’t have information about them. They could hear her shouting and crying outside. Later the army made my sister ask my parents for a sweater since they were taking her somewhere. One of the army guys then also asked my father for a rope. They used that rope to tie her to a tree.

At around five in the morning my family heard gunshots. When they ran outside after the army left, my sister was lying against the tree and was dead. She was naked, her chest has been scratched and the blood was flowing through her vagina. She had been raped and killed brutally. The gun was shot through her back.

My innocent sister was killed for no reason. 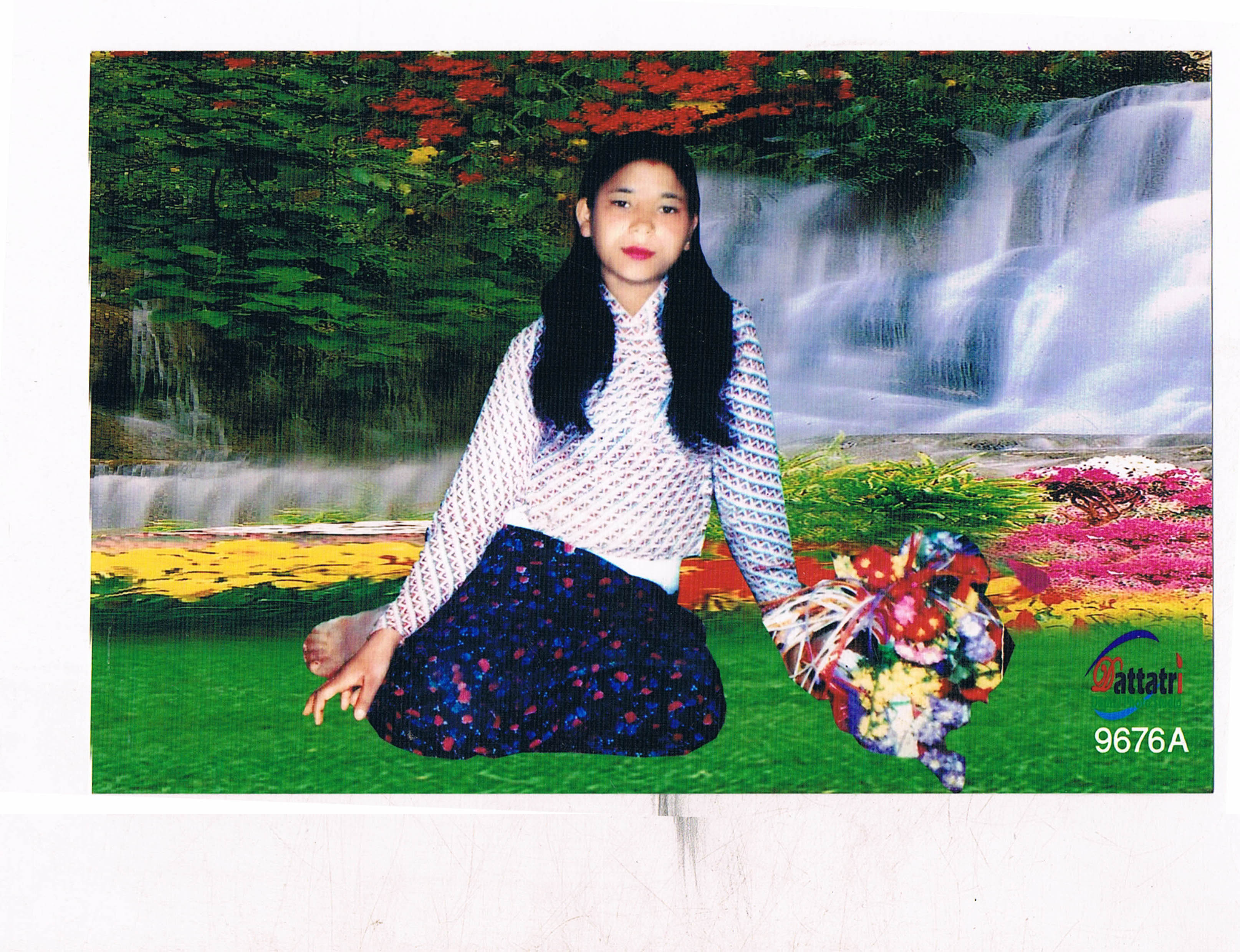 When my sister was killed our family got destroyed. We are still mourning for her. I blamed myself for her death. I felt like if I didn’t exist, then perhaps things would have been different. I still feel the same.

My sister was a noble person and she had not committed any crime. My parents filed a complaint in the district police headquarters but it was not registered.

After 2007 I could not remain quiet about what happened. I joined my father in his quest for justice for my sister and we filed many cases.

We are still fighting for justice. 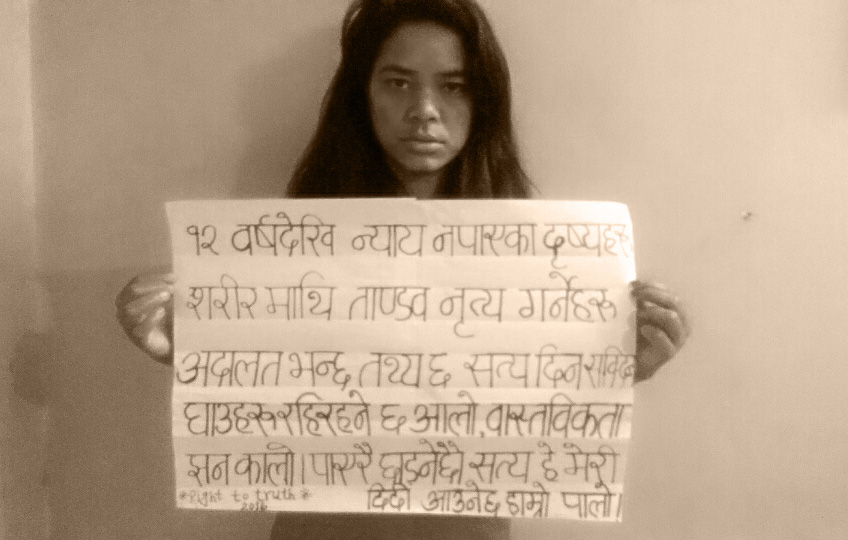 Looking today at the situation of Nepal, I fear that the upcoming generation will face a similar situation of war, fight and sacrifices until our issues are solved and the goals are achieved. What my brother and sister went through might also be faced by people in upcoming generation.
Our brutal past is not talked  in our society and the issues that came along have not been addressed. The inequality we face on a day to day level is what gave birth to war. We cannot stay silent anymore. People might once again die brutally.

What I feel is that we need to speak up for tomorrow.

Many incidents took place. But what happened to us is worth noting. My mother complains about the injustice everyday. But likewise there are many other people who lost their brothers, sisters, daughters and sons like me and my family.
The politicians who promised us rights are no longer around. They played a dirty game. Their speech is based on lies.
Every one of us has the right to know the truth. What was lost, how  it is going to be recovered? How can the void be fulfilled? Since 2007, I have been working for people who were victimized during the people’s war. I want to fight to help them get justice for what they have lost.