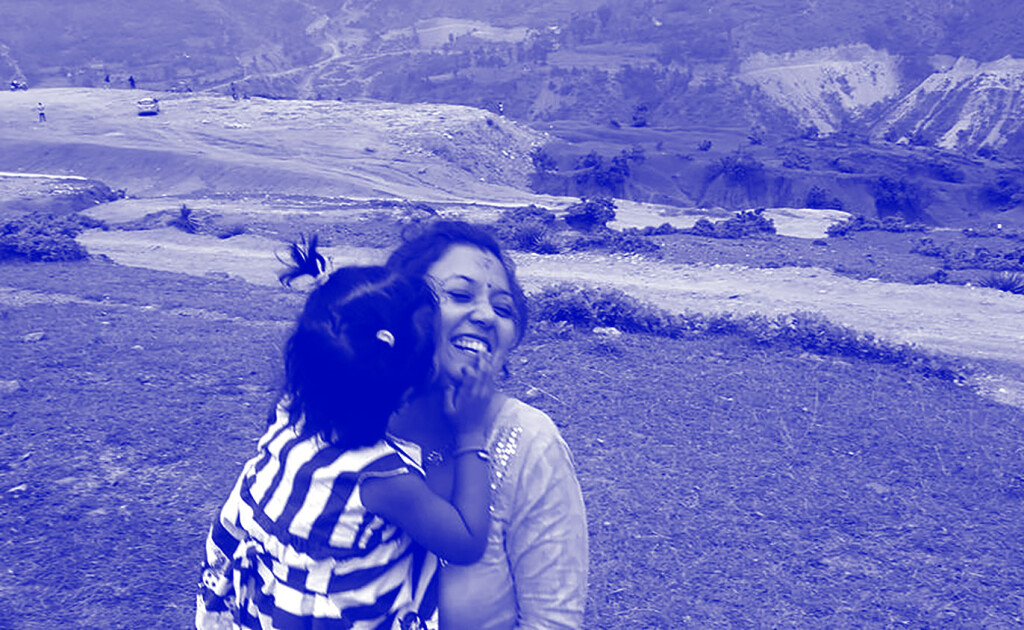 There was a time when, because of her, I would sit in a corner of a room and cry. But, lately the smallest changes in her, brings me a lot of joy. Also, sometimes I feel very proud of myself because I was able to recognize her at a proper time. It is because of her that today the story of my life has turned around.

I have always wanted to live independently. So, as soon as I was done with high school, I came to Kathmandu from Lahan to pursue my further studies. Even till today I can vividly remember my college days. I never wanted to depend on anyone and so just after I completed my BBA I started to work at “Kohinoor Housing Center”. I was able to sustain myself with my earnings and I also enrolled myself for a Masters course. I got married soon after. I started to work at Siddhartha Finance after my marriage and both my marital life and career was going smoothly. Three years after our marriage, we decided to have a baby. We were really happy when we conceived successfully. Like any other mother, who dreams of what she would do for her baby and how she would raise the child, I too began to have a lot of dreams for my child. I wanted to raise my child to be independent and instead of pressuring her to become a doctor or an engineer, I wanted her to be whatever it is that she wanted to be. I had a little dream to be known because of her. Nine months after dreaming every possible dream for my child, I gave birth to my beautiful daughter. Few months after her arrival, I slowly went back to my normal routine.  I was fulfilling my role sometimes as a wife, sometimes a mother and other times as an employee.

In 2015, my daughter was 14 months old when we had a massive earthquake in our country. I still remember that she was asleep and I had cried endlessly when I carried her during the earthquake. After that, I had left my daughter at my mother’s place. Four months later I brought her back envisioning all wonderful possibilities. However, as they say, life is never how you imagine it to be. I felt that there was a huge difference in her behavior. She preferred to stay alone, she didn’t interact with anyone, it looked as if she was really hurt. I started to get worried. I assumed that maybe her fear of earthquake was still there and that’s why she was behaving that way, or maybe because I kept her away from me for a long time and hence she was behaving like that? I started questioning myself a lot.

How can a mother possibly be okay with any of that?
I too wanted to see my daughter laughing and playing
like any other normal child.

I started to research. I realized that I have to spend good amount of time with her. I even consulted with my brother who is also a doctor. While researching, I came across a word – autism. This word was very new to me. I knew nothing about it. I was advised to meet and consult with another doctor. During my first meet itself, the doctor said that she has symptoms of autism. I got even more stressed. There wasn’t much information about autism in Nepal during those days. I consulted with many doctors looking for its cure. It got so tiring and I lost my hope. Surprisingly, Autism Care Nepal brought back my hopes. Without any further delay, I took my daughter to that organization. After careful and thorough inspection, the special educator there finally concluded that she did have autism. But, her treatment could take some time. She was only 18 months old then and so I was advised to wait for a while. It was so disappointing. He was a special educator so he spoke in the medical terms but I am mother. How can a mother possibly be okay with any of that? I too wanted to see my daughter laughing and playing like any other normal child. I didn’t want to wait any longer. My entire life was upside down. All I could see was just my daughter. I didn’t want to lose even a single day for her treatment. I thought that autism is also like any other disease, that the sooner treatment started, the sooner it would be cured. I was confident that I will take her anywhere in the world for her treatment. No one in Nepal was really able to explain to me what autism really is. I always thought that if she’s provided with proper treatment she will be perfectly fine and so, I never stopped my research. 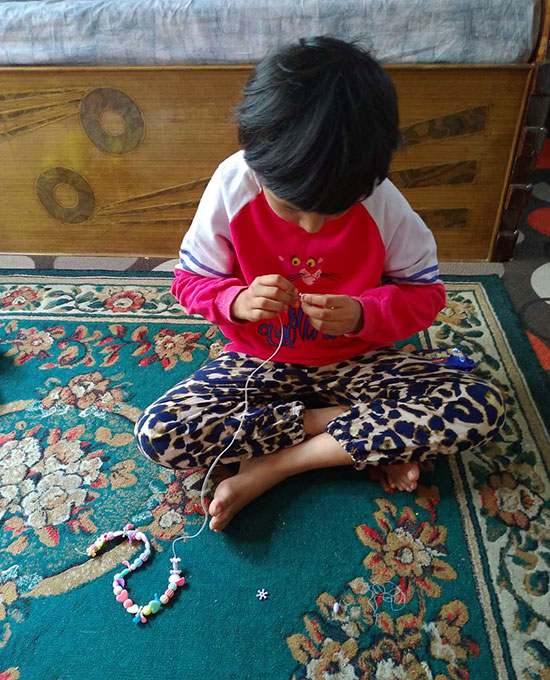 After a while I found out that my aunt’s child was also autistic. They were in Kochi, India for the treatment. Me and my husband discussed about the treatment in India and decided to take our daughter. I really didn’t have to think much whether or not I should resign from my work then. I just wanted my daughter to get better. The next day after my resignation, we took our daughter to India. We stayed there for four months. The heat and the weather of India didn’t suit my daughter’s health and she often fell sick. We had to admit her to a hospital instead of the therapy center. In Kochi, they only communicate either in Malayalam or in English. Our daughter was small and didn’t speak either of the languages so communications became a major issue during her therapy sessions. During our four months stay there, she was only able to get a month’s therapy. There were not much changes in her so we decided to get her back to Nepal.

We didn’t know where in Nepal we could take her for a proper treatment. To make her a little more active, I started to give her therapy at home with whatever I knew. While researching, I came across National Institute of Psycho Educational Counseling. I took her there and started the therapy sessions. I noticed few changes in her and I was hopeful again. Along with my daughter’s therapy session, the counselor there also started to counsel me. I used to think that my daughter is disabled but after careful analysis, I understood that she was differently able.  We then slowly began to accept her for who she is and when that happened we could feel that she was also happier. Earlier, she would be terrified even to cross a small path and now she can walk across big roads.  I still remember the day when she called us mother and father. I felt like we had won it all. I was so happy that I couldn’t stop crying. Even now sometimes when she is playing, she would randomly blabber these words – mummy and daddy. I realize that it will take a long time to bring changes in her.  We have to teach her in the way that’s more comfortable for her. Clearly, this is not the easy way but it’s not impossible.

I do feel very sad but at the same time I am also happy that because of her, I am learning new things.

Whenever I had to go out, parties or gatherings, I never used to bring my child along with me thinking that it would be very difficult to manage her. I used to drop her at my brother’s place. Later, when I understood what autism is and her behaviors, I now take her with me, every place I go. Once she started to spend time with these groups, she began to understand our world. It takes a little time for her but it’s not like she doesn’t understand. Hence, these days I only go out when it’s feasible for me and my daughter. My family and my friends are very understanding and that’s why they organize any gathering according to our feasibility. I have noticed that many other parents who have autistic children find it difficult to bring their child in social gatherings. But, I think these children should be brought in social gatherings and slowly they will learn to adjust. 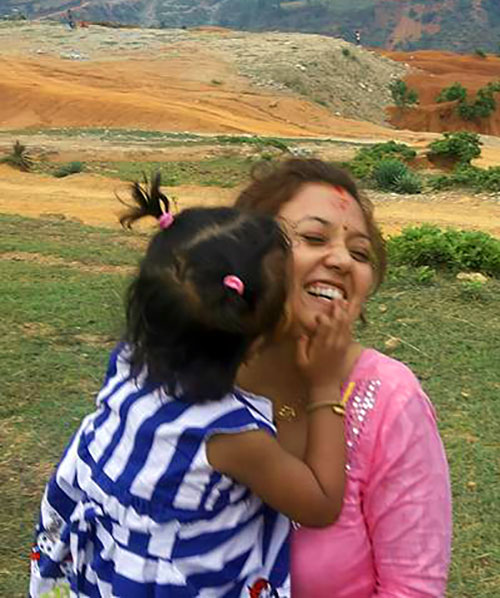 I have to pay special attention to my daughter. This is the major difference between us and mothers who have “normal” children. No matter what, we cannot be as free as other mothers.  Autistic children have a different world than ours. My daughter’s therapy starts at the beginning of my day. My daughter is now six and a half years old. I need to help her to go to the toilet and brush her teeth. After a lot of therapy, she can now eat on her own. Other children can learn many things by themselves but she couldn’t. I need to teach her in a symbolic way which she can understand well. After finishing my household chores, I prepare her to do her exercise according to the schedule of her school. I spend my days mentoring her to do her exercises and playing with her.

Every one suffers and it’s that suffering which will teach you a lot about life. Sometimes I used to feel sad because of my autistic daughter but it is only because of her, I have so many positive changes in me. I am very glad for that. I used to very reserved person. I never could talk to people quickly and openly and I lacked confidence. Now, because of her, I can speak with confidence. When I first started taking my daughter to the therapy center, she used to happily run towards her therapist – Sarita maam. She was happier with her mam than with me. That made me feel very bad. Therefore, I started to talk to her caretakers. I observed how they used to interact with her. Then slowly, I got closer to my daughter.

Now, she is my friend and I am hers.

In many cases, women feel bad because after having a child, they cannot continue to work on their careers. But, when I look at myself, I feel I have learned a lot and achieved a lot as well. I find myself a lot different than other mothers. I think I have gained all the skills required to look after autistic children and would like to work with them on a professional level one day when my daughter is a bit more grown.  I am really proud of my daughter and who she turned me into. 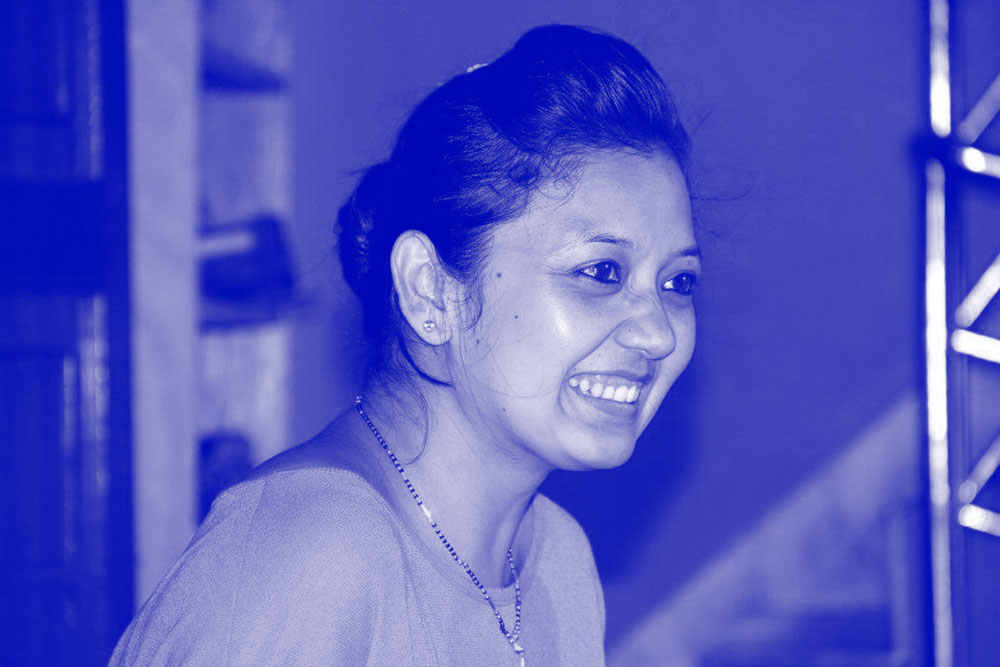