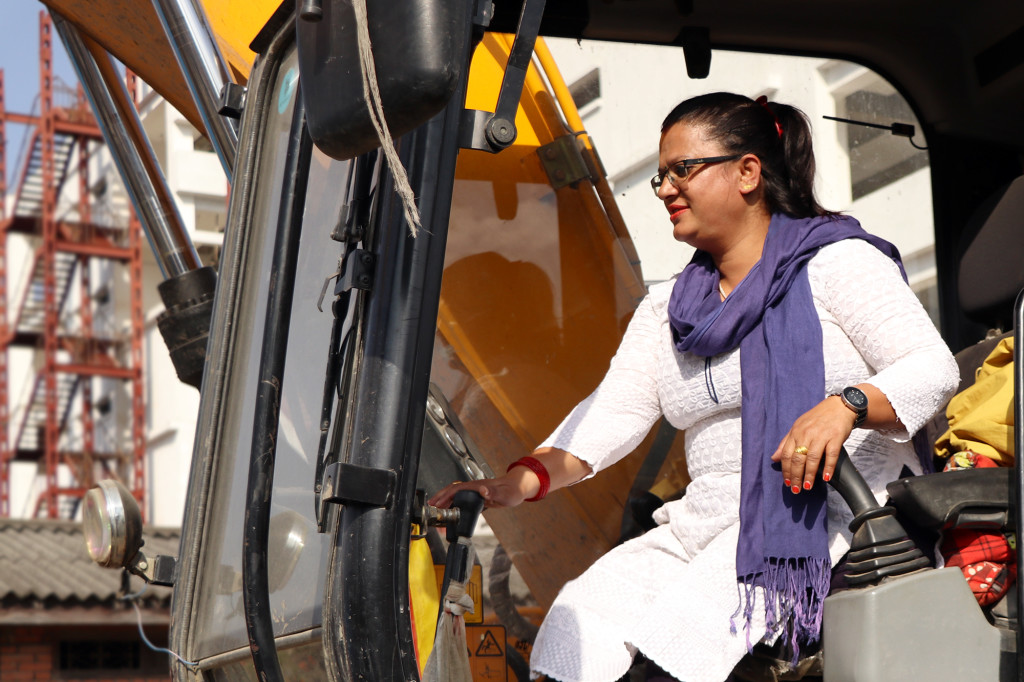 I want to be known as Nepal’s first female heavy equipment operator rather than my name. I was raised in a lower middle class family with two little sisters in Aabukhaireni, Tanahun. My father and mother were farmers. My parent’s farm was the only source of income in our family. I was a good and hardworking student. As my father and mother were getting old, they couldn’t work in the farm anymore. Due to this, we faced a lot of financial problem and I was forced to leave my studies. The circumstances were such that I had to start looking for a job.

It is evident that our society values a son more than a daughter. Because my parents had no sons, our neighbors loved to highlight the difference between sons and daughters. Too many gossipy mouths were always telling my parents that their daughters were useless because we wouldn’t take care of them in their old age and we would not be able to perform the death rituals. All of these apparently was a son’s responsibility and not a daughter’s. I didn’t like when people spoke like this.

Is there any difference in the birth pain a mother goes through regardless of the gender of the child? No.

These gossipy neighbors would also often say that a girl child is not capable to generate an income for her family and be responsible of her family members. I had a burning desire to shut all of their mouths and show them that a daughter can also earn and be financially responsible of her family. After I left school, I went to Nepalgunj for a job. I got a job as an office helper in a construction company (Lama Swadesh Nirman Company).  I never imagined being a heavy equipment operator. While working there, I started to have an interest and curiosity in all the equipment rather than my work. One day the director asked me why I always looked at the equipment. I was 16 then. He told me if I wanted to learn how it works, I could come in morning and evening without hampering my office work. I began to invest my mornings and evenings to learn about the equipment’s parts and how it operates. Looking back, I wonder how I was so courageous.

After six months of my employment, someone who had worked as a heavy equipment operator left that company. Our director came to me and said, “I am losing a lot of business because there is no one who can take responsibility as an operator. Will you take that responsibility?”

I told him I would give it a try. I was nervous and scared at first but gradually I became more confident. This is how I began my journey as a heavy equipment operator.

It all feels so surreal. 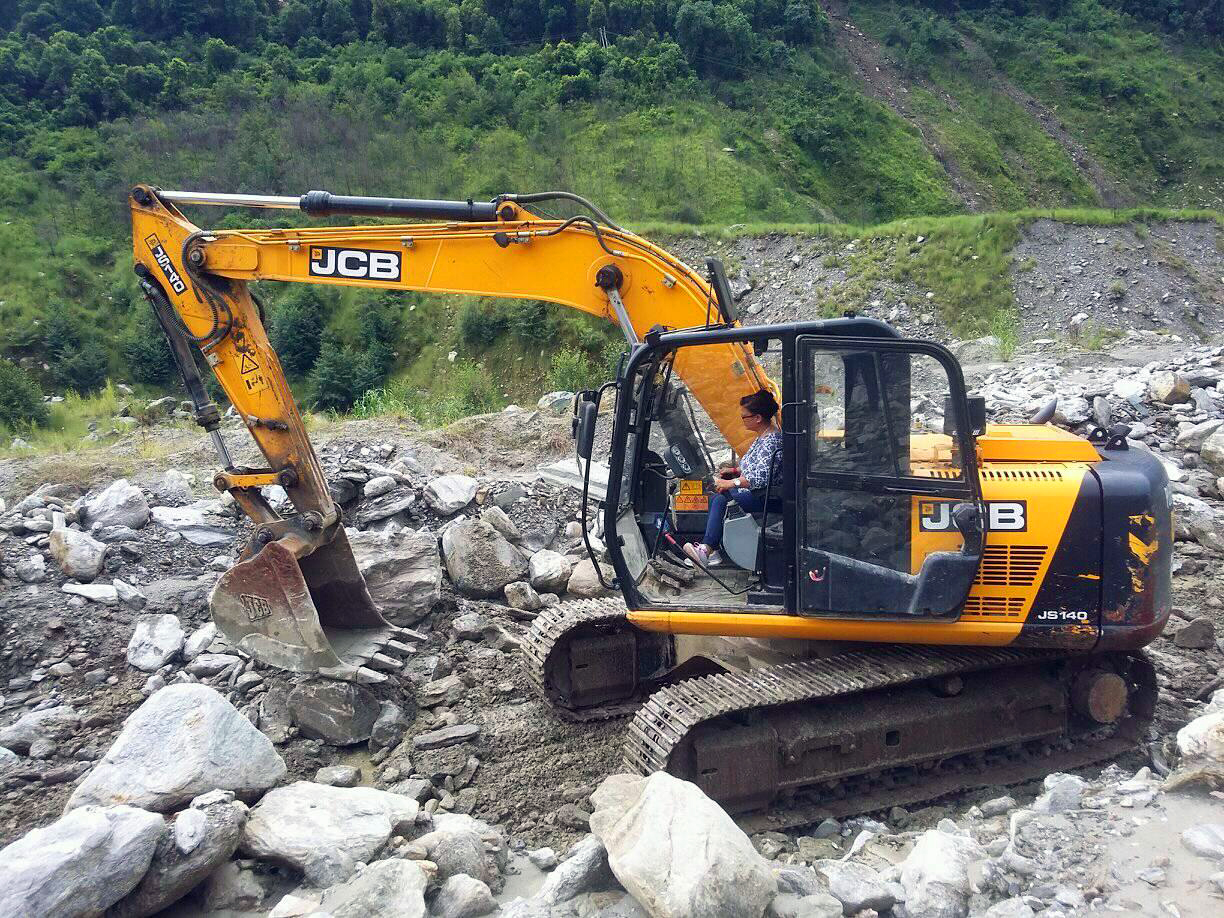 The same gossipy neighbors would tell my parents that I had eloped with a man. Every week I had to wait for Saturday to call my parents because it was cheaper than other days. While talking to them, my parents would cry and ask me to return back. I always refused them because I had to earn money and take responsibility of my family. 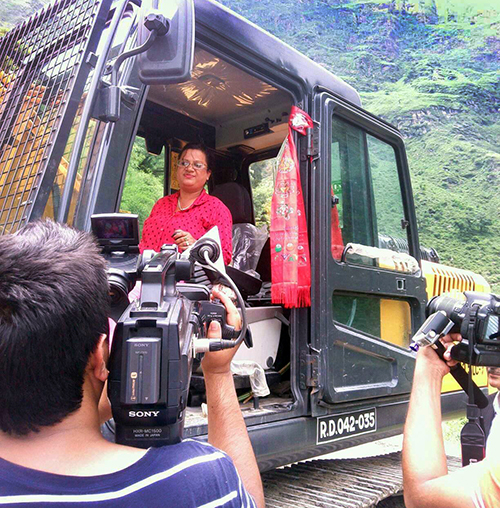 While working in Kohalpur one time, a journalist wrote an article about me in the daily newspaper, Gorkhapatra in 1999. My father’s friend who usually spoke badly about me had read that article.  He then went to my father and told him what a great daughter he had. When I heard this, I felt like my struggle had been worth it. I had won the battle. I never looked back in my life then-after.

After a certain period, my company suffered a huge loss and all of a sudden, I was unemployed. I knew of a manager at Kalika Construction Company. I called him and went to work there in Narayanghat. I didn’t have a license but they hired me as an equipment operator because they didn’t have another choice. In Nepal there is a provision that in order to get a license for heavy vehicles, one must have a license for four wheel vehicles. I didn’t have a license so they hired a female assistant for me. Basanti Gurung, probably the second female heavy equipment operator in Nepal.  I trained her to operate heavy equipment within six months. After that, I left that company because I wanted to work in Kathmandu.

In Kathmandu, I struggled a lot. I went to different companies to get a job but people usually stared at me. Many said, “Men think thousand times before working as a heavy equipment operator, how do you think you can work as an operator?” 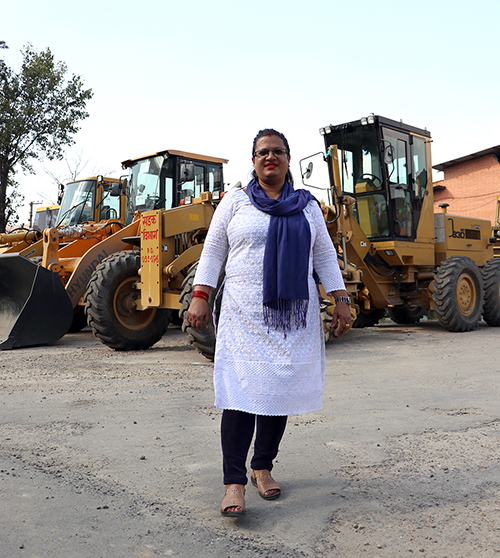 I worked at multiple hydro-power sites. However, I still did not have a license.

Two years after getting my four wheel license, I finally got my heavy equipment license on 2005.  It took me six years to get this license.

One fine day while working on a site, I met Suresh Shrestha. He was the manager of another company. He used to borrow equipment’s from our company. We fell in love and got married. Suresh didn’t know how to operate heavy equipment and initially he was not even interested to learn. But eventually he lost his job and that’s when I trained him to operate these heavy machines as well and we started working together.

At one point of my life, I decided that I needed to work for the government instead of private companies. I applied but learnt that I needed to have finished high school to work in a public company so I re-joined school. I would go to school early in the morning and went to my job by 10AM. After work, I would often go for extra classes to help me. Finally in 2012, I got my high school diploma. Three years later there was a vacancy in the heavy equipment division of the government. I applied and succeeded. 10 months later I was promoted to a senior level position. 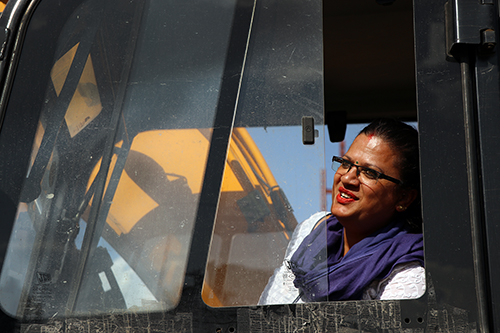 Growing up, my mother had to walk long distances to fetch drinking water while my neighbors had access to tap water. I used to feel really bad about it. After working, with my first pay I installed a tap at my house. One time, my father was really sick and the doctors in our town had given up hope. But I worked hard, saved my money and brought him to a hospital in Kathmandu where the treatment was better and he survived. In doing that, I shut the mouth of my neighbors who would say that only a son takes care of their parents in the old age.

People have all kinds of stereotypes about women and about people who work on construction sites. They think women are weak and cannot handle machines. They also think people who work on construction sites are illiterate, and uncivilized. But ever since I was a child I liked to break boundaries. And today here I am, breaking all kinds of stereotypes. 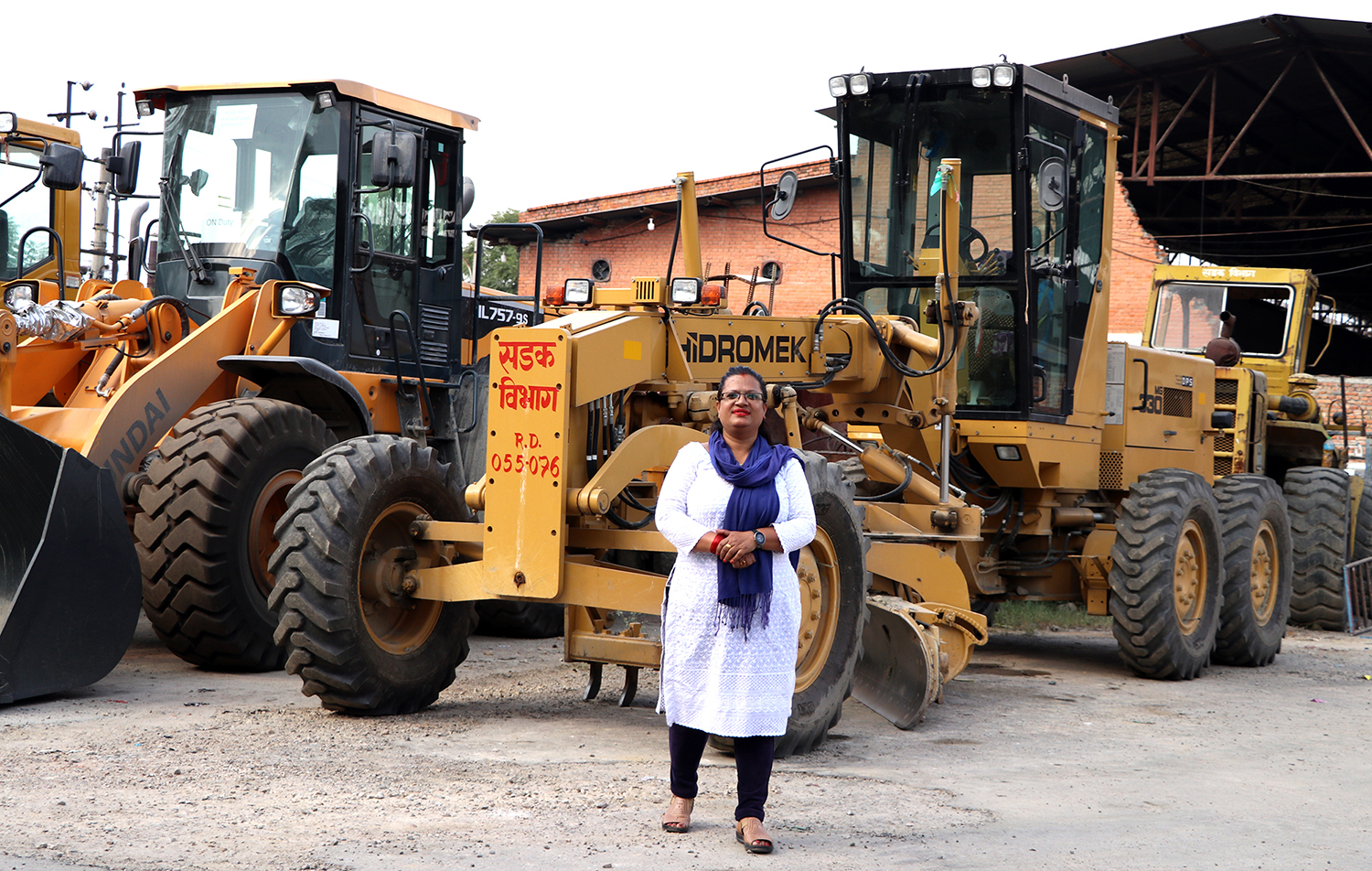